Paying it Forward: “We Finish Together”

How many of us can say this?

“I have too many medals”

About a year and a half ago I said that. I had medals stashed everywhere. I had some medals hanging up from races that have a special place in my heart, but I had medals boxed up and stashed that needed a home.

This is where I found, “We Finish Together,” started in 2009 by Kim Stemple in what can be described as pay it forward moment after she was diagnosed with multiple autoimmune conditions.

Kim was diagnosed in 2009 with a multitude of auto-immune diseases, triggered by genetics. A teacher by profession and an avid runner, she had planned to run the Las Vegas marathon, but was unable to participate because of her illness. After the race, a fellow runner spontaneously handed Kim her medal. Kim was so inspired by the gesture of kindness, she asked another friend to create a personalized tag to add to the medal that read, “The greatest use of life is to spend it on something which will outlast it.” The medal and tag accompanied Kim to every infusion and the idea of a medal with a personalized message to share with someone else was born and in 2012, WE Finish Together was officially established.

In 2012 Kim met Florida runner Blake Starr who offered to open a chapter or “fleet” in South Flordia. With a large network of runners helped Blake deliver her first basket of medals with personal messages to Joe Dimaggio Children’s Hospital. In October of that year an article in Runners World put the organization on the national radar, Starr and Stemple expanded the reach of the organization and started sharing medals with foster children people facing homelessness, active military service members and veterans, children and adults with mental and physical disabilities, and so many more.

Kim passed away in 2019 but her legacy continues to grow. 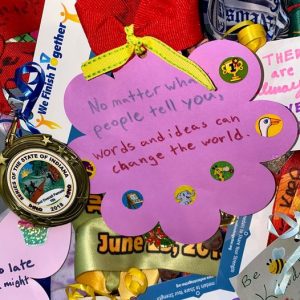 They are always excited to get donations of your medals. You can find out how to get involved on their website, We Finish Together .

Can #OCRCooperative become a real movement?