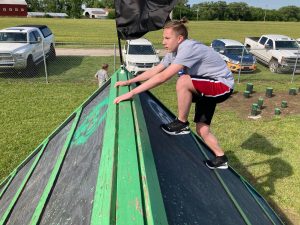 I love local brands, so when I found out there was a race that I wasn’t tracking the same distance that I drive to work every day I was super excited.  I did there winter version, The Frozen Monkey back in December, but this was my first time running their summer event, The Filthy Monkey.  Here’s what I thought of their 2k 20+ obstacle event: 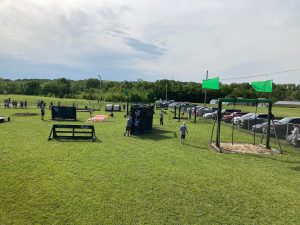 Check In:  Check in takes place at the Junction City Athletic Training Center in Junction City, Kansas, right off the highway.  With a small venue, we parked literally touching the side of the course meaning that I could leave all my stuff in the car and easily walk back and forth if I needed something.  It also means that instead of port-a-potties for once at a race there was a real bathroom! 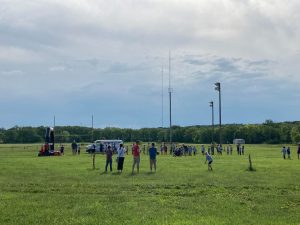 Kid’s lining up for their turn of the time trial in the large open starting field.

Course:  The course was a simple run through the field setup in a time trial format.  Groups of three were released one at a time to run.  After a run through the field, which was clearly marked with flags and volunteers standing at every turn, we entered the obstacle gauntlet.  The gauntlet essentially was back to back of a little over 20 obstacles. 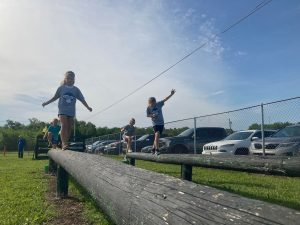 The Obstacles:  The obstacles are part of the permanent course that is setup at the venue.  Unlike most venues where the obstacles are spread out over several miles, every obstacles is jam packed into about 200m of terrain.  You essentially do five obstacles, touch the fence line and repeat about four or five times.  Included in the lineup are things like monkey bars, rope climb, slant wall, A frame cargo net, vertical cargo net, tire crawl, hay bales and 2x log balance beams. 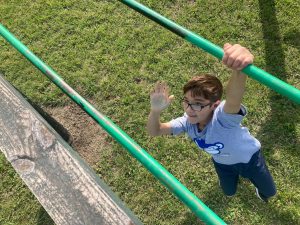 A participant crossed the monkey bars in his Filthy Monkey event shirt.

The final obstacle is a two part angles balance beam over water with water spraying down from a above with a sign above you that says “Better not fall, everyone is watching.”  After that obstacle, you run across the finish line.  The fun sign above the final obstacle speaks to the nature of the event.  The water pouring down on the balance beam as well as the slip n’ slide on course was a change from their winter event adding a little bit of wetness to an otherwise dry course. 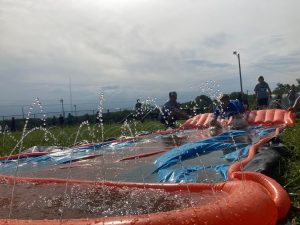 So was it an easy course?  I’ll say the same thing my friends at Obstacle Course Racing World Championship say…“if it’s easy you weren’t running hard enough”.  Below is a picture of my teammate and I finishing after redlining as hard as possible for under six minutes.  While we didn’t have any trouble, we certainly didn’t finish and say “that was an easy day.”  In fact the short course and need to be perfect, since we were right next to each other made it challenging for both of us. 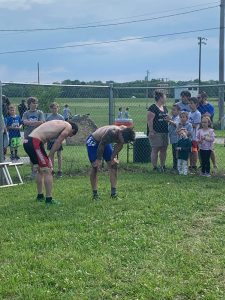 Awards:  The event did a great job recognizing multiple age groups.  They even did awards three deep in each age group provided a plaque for 1st, 2nd and 3rd.  Athletes were announced and brought to the podium for pictures with categories for kids (under 8, 11, 14 and 17) as well as adults (under 25, 35, 45, 59 and over 60). 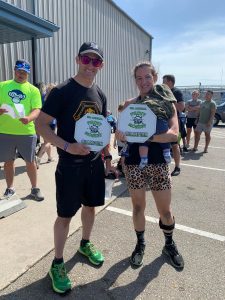 Big Red One Ninja & Obstacle Course Racing club at the event showing off some finisher awards.

Perhaps most importantly, I like to judge events not by what goes well (which was almost everything in this case), but how they respond when there are hiccups in the plan.  After my MudGear-Battle of the Lions Pro Teammate Thomas Plush and I ran, our chip times didn’t register properly.  The race director did a great job of making the correction and ensure the awards were announced correctly.  The announcer at awards even prefaced the presentation with “this won’t exactly reflect the timing you see online because we had some timing chip issues”.  Anyway, I point this out because of how well it was handled and the timing was done by a 3rd party, not the race itself. 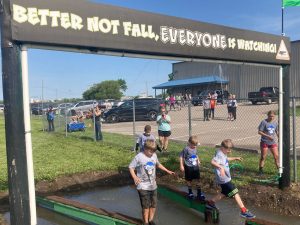 Festival:  For a small event the festival was great.  Music was playing, they had a BBQ for sale and even a raffle.  The raffle gave away two adult bicycles and two kids bicycles, which means a couple people left the event with some pretty amazing prizes. 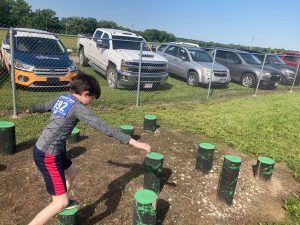 Overall: For those who are experienced Obstacle Course Racing (OCR) athletes, the Frozen/Filthy Monkey series of events may not be worth the drive (top three all finished in 6:30 seconds or less) but if you are local or are looking to bring some people into the sport this is a great starting point.  The kids waves at the event were larger than the adult waves making it a very family friendly atmosphere.  I’ve already made plans to bring my dad out to the event next time they host one and will likely bring my daughter out to run the event as well.  If you are nearby, especially with rising gas prices, you may want to add the Filthy/Frozen Monkey to your calendar to get your OCR fix at a fun local event. 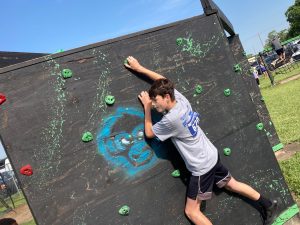 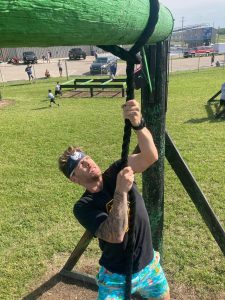 Thomas Plush in his MudGear – Battle of the Lions shirt on the rope climb. 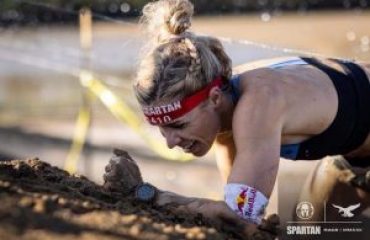